Located at the heart of Grand-Baie, Mauricia Beachcomber's diving school is very close to all the diving sites in the north of the island. Most of these are between 15 to 25 metres deep and they constitute a real delight for underwater photographers. A five- to twenty-minute boat trip will take you on these sites. For the more adventurous, dives at ‘The Wall’, at Gunner’s Quoin, may also be scheduled. For those parents who wish to enjoy the pleasures of diving in absolute serenity, the mini-club will be happy to take care of their children while they indulge in their preferred activity. The diving school specialises in underwater photography, and the passionate instructor will gladly initiate you to the different techniques. With more than 22 years of operation, this diving school is the oldest of the Beachcomber group. 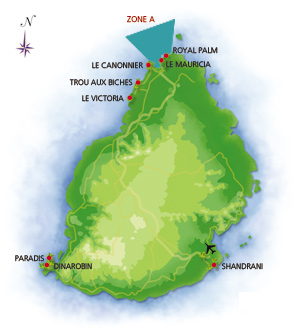 On this white sandy seabed, the light radiates on small patches of reefs scattered here and there. The site has been named after the numerous moray species that may be found on a succession of reefs. This rich fauna is home to some rare or endemic fish species. A highly recommended site for photographers or for refresher dives.

THE BEST DIVING SITES ZONE B

Here, the landscape is made up of corals encircling enormous granite boulders. This constitutes an ideal environment that provides hiding spots for the titan triggerfish that will bid you welcome as soon as you get into the water, alongside the wrasses, parrotfish, clownfish, schools of snappers, nudibranchs of all sizes and colours, squirrelfish, and superb gorgonians. Out of sheer curiosity, the Javanese moray eels, which can grow up to two metres, will be drawn to you in search of a gentle stroke.