The French rider, Karim Laghouag is the fourth Olympic champion to visit a hotel of the Beachcomber Collection over the past month with the boxers, Tony Yoka and Estelle Mossely, as well as the pole vaulter, Renaud Lavillénie. 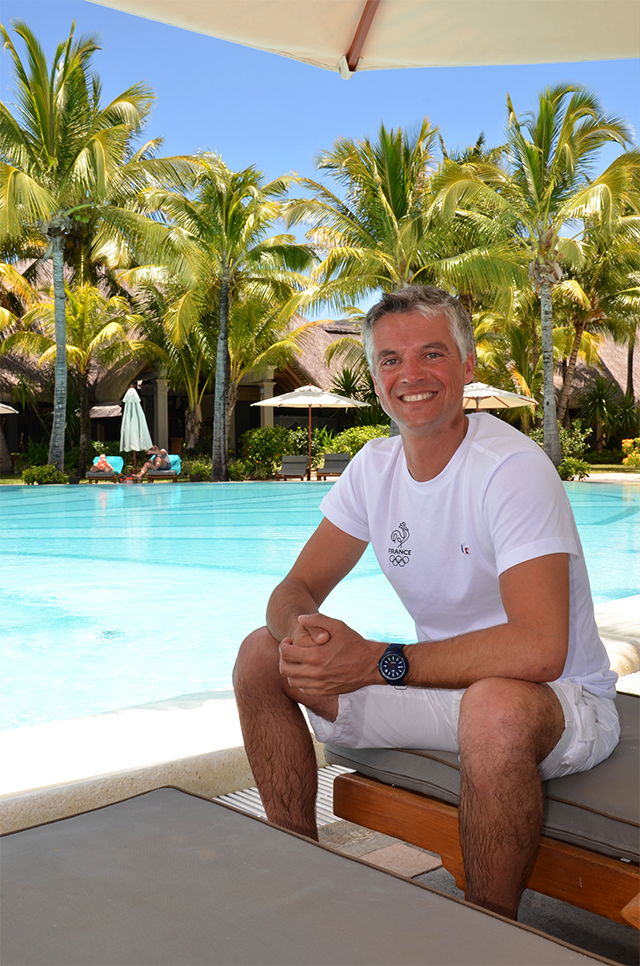 Karim Laghouag has spent a few days early November at Paradis Beachcomber Golf Resort & Spa with his brotherin-law, the comedian, Arnaud Tsamere, and their wives Camille and Margot, the daughters of the French car racing legend, Jacques Lafitte.

The Olympic team eventing gold medallist at the Rio 2016 Games comes from a family of horse lovers. A relative of his Algerian-born father was a jockey and his maternal uncle, Pierre Defrance is a riding instructor who has previously taken part in pre-Olympic eventing competitions.

“Horses are truly majestic and very smart creatures. If you know how to manage them, they can be very cooperative,” he says. Among his references are Pierre Durand, who won gold at the Seoul Olympics in 1988 with his little black horse, Jappeloup and New Zealand’s eventing legend, Sir Mark Todd.

For him, winning gold in Rio a few weeks ago is akin to a turnabout of fate. He was only 2 years old when he suffered a hip injury after falling down stairs and was bed-ridden for two and a half years. He was then confined to a wheelchair for six months and underwent another six months of rehabilitation before being able to walk again. “Specialized hospitals were not as sophisticated as today and at the time, surgery was not an option. I therefore had to lie still in bed until while my hip mended.”

At around the age of 8, he was finally able to take up sport again. “I tried boxing, horse riding, tennis and a multitude of other sports,” he says. “I have had that same determination all my life and it has motivated me to win that Olympic medal.”

However, the French team were seeing themselves as outsiders. They were among the five teams that could potentially win a medal with the Germans, Australians, New Zealanders and English. They were aiming for bronze but ended up at the top of the podium. “

"We gave our all in the team event, it was our main strength and I think that this medal was more significant than any other. One of our teammates, Astier Nicolas, who won silver in the individual event, said that it had nothing in common with the team event and the team spirit that helped us win,” says Karim Laghouag.

He felt overwhelmed after winning gold in the team event. “I was in tears for half an hour, recalling souvenirs of my childhood, the efforts I have made with the support of my parents, my uncle, my grandmother, my coaches and also my teammates.”

After his eventful stint in Rio, the 41-year-old rider originally from Roubaix in northern France has changed his plans for the future. “I was initially aiming to achieve my best score possible at these Games and then retire in order to devote more time to teaching and plan my career transition. Everyone thought that since I had won a gold medal, I would decide to put an end to my career but in fact, it has been a real boost for me. I want to compete again  at the Tokyo Olympics.”

His Olympic medal has also given him additional credibility to set up a professional structure dedicated to high-level eventing, a project that has been close to his heart for the past decade.

Talking about his stay in Mauritius, he says that even if his wife and sister-in-law had visited the island in the past, it was an exciting first for him. “I had never come here before, just like my brother-in-law. It is a total discovery. The hotel is very nice and is an ideal place to relax and unwind. Sports fanatics like us can also play tennis, there is a superb golf course, we can go jogging and the sports centre is really fabulous. There’s no time to get bored here.” Additionally, the two couples have had the opportunity to indulge in dolphin watching.

Karim Laghouag says he really enjoys the intimate atmosphere of Paradis Beachcomber as compared to other places he has visited. “I will be very happy to come back here. One of the good things is that it’s a very relaxing place,”  he adds. “Everyone takes good care of us and I think this is due to the genuine hospitality of the Mauritian people.”