Behind the scenes of the Beachcomber films The “making of”

Apr, 30th 2013
СОЦИАЛЬНЫЕ СЕТИ
Tweet
When people from different horizons sharing a common passion for images get together, when professionals share their expertise, when friendships defy time that goes by, the journey may start.

A quiet October morning on Mauritius’ west coast and a cloudless sky over the village of Tamarin. The first rays of the sun start to skim through the mangrove trees alongside the coastal road. It is just after six and saltpan workers have already been hard at work for some time. These intrepid women, with their boots and heads covered, gather coarse-salt crystals by scraping the paved-stone floors of the salt flats.

In a muted humming sound, like something from another era, a six-rotor drone slowly flies over the area where the salt pans are located and then hovers over one of the salt gatherers. She hardly gives it a glance before getting down to work again, taking no notice of the flying machine. “They’re used to being photographed,” thinks Renaud who is controlling the flight. He makes it turn backwards 60° north and then forwards for a fairly quick and final flight over the saltpans before gently landing the drone further off, where Brice stands, his eyes glued to the film monitor. He nods to tell Renaud that the shots are fine, who in turn gives Claude a thumbs-up sign. “All good. Pack things up!” says Claude, a film-maker from VTF (Vidéo Techno France) in Paris, that Beachcomber Hotels has appointed for a series of films.

The whole venture had begun three months earlier, when Beachcomber’s Commercial department decided to entrust a French company with the making of several films. The aim would be to show the quality and standing of its hotels, whilst also trying to convey the magical atmosphere holiday-makers can experience during their stay in a Beachcomber establishment.

Renaud Van der Meeren was the first to be contacted about the project, as he was already well aware of the standards Beachcomber sets where visual material is concerned. After various discussions with the group, he produced a project outline and invited his friend, Pierre Lefort, photographer and programme producer, to look into the co-production of a prestigious series of films on Beachcomber’s behalf. Should the project take off, Pierre intended to bring in Claude Degoutte, a film-maker with a solid reputation in the publicity and corporate film sector. He in turn chose Eric Genillier as director of photography for ground filming, backed up by Tamsin Moufflet.
Renaud, meanwhile, is often assisted by Brice Charrue when it comes to aerial shots using a drone or an ultra-light aircraft. Brice’s back-up is essential as such filming requires technical preparation, often essential in determining how successful the shooting is. With the completion of the air and ground teams, all that remained was to identify the person to act as liaison between them and the hotel teams. Axel Ruhomaully was asked to step in. He is one of the professional photographers regularly hired by Beachcomber.

With Claude, Renaud and Brice on board, flight MK051 landed at 12.30 on 6 October 2012 at Mauritius’ international airport, a week ahead of the land crew, for more precise site surveying. This turned out to be very successful and some filming could already be completed. A week later, the day before the land crew was due to arrive, the meteorological services announced the imminence of a tropical cyclone, already named Anaïs. According to the forecast, the weather would deteriorate over the coming week, with gusts of some 60 mph. The difficult decision had to be taken to postpone the arrival of the second team by a week, with all the consequences – last-minute ticket changes, the extra expenses involved, and the filming schedule turned upside down. Eric and Tamsin finally managed to land on Monday 22 October for the ground shots.
Claude, used as he is to this kind of activity, explained that a lot of work is done in advance to fix the places, settings, people, logistics and décor to be used. Even with a filming plan, you still have to adjust to the reality on site, with various mishaps, the weather playing up and light conditions changing. Fortunately, there are also some happy surprises, with lucky breaks that occur when you least expect them. “As on the deck of Le Mauricia, with its red seating, when all of a sudden a youngster dressed in blue and green appeared, as if straight out of a Goude commercial (Jean-Paul Goude shot a spot for Kodak that followed the adventures of the Kodakettes, mischievous kids clad in red-and-white stripes) or Jean Baptiste Mondino’s spot, also for Kodak, Voleurs de couleurs (The Colour Thieves). He approached us leaping about on yellow flippers and we asked him to do the same again. I heard him flip-flopping up from behind me, and I lined up a shot in the middle of the deck to take in Eric, the director of photography... but the boy went off to the right instead of the centre. I triggered anyway. The end result was a very odd composition, with the boy in full flight captured on the right, the director of photography to the left and a large void in the centre which was totally unexpected. Dark clouds were looming overhead, as if announcing the end of the shooting session.”

However, there’s no room for improvisation during aerial shooting, as it is in high-wire stunts. Similarly, powered paragliding flights are prepared with the highest degree of precision. The slightest error can have serious consequences during the flight…

The end of the day, somewhere at the foot of the Moka mountain range, not far from Crève Coeur, a twine of fluffy clouds was being blown away by the prevailing winds. The sun was not going to be around for much longer and time was running out fast. Renaud checked that the accumulators were firmly attached to his belt. These enable him to properly operate the gyroscope so that the equipment remains stable at altitude and filming can proceed smoothly. The machine enables its operator to reduce the effects of the wind buffeting the equipment as well as the vibrations produced by the engine. By means of an anemometer, Brice measures the wind pressure and transmits the information to the pilot. After half-an-hour getting prepared, Renaud is ready to take off. In no time at all, he launches his sail and off he flies. He gains height with astonishing ease, signals his position on the auto-information frequency and indicates his flight path. His objective is already in sight, the tip of the Pieter Both Mountain. Renaud starts filming.

The rays of the setting sun lend an almost supernatural air to the rocky slopes and the sugarcane fields down below. “Amazing!” hears Brice in his headphones. He sets off straight away to meet Renaud a bit further along, at Malenga, agreed landing point for the paraglider that day. 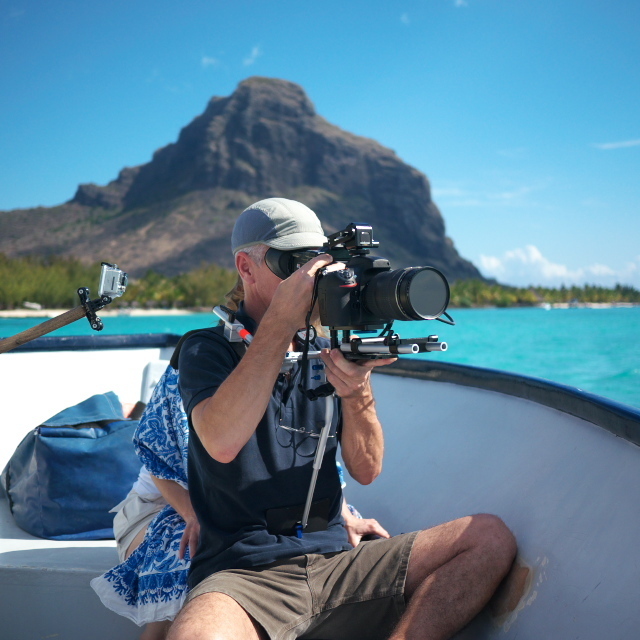 ​
This great saga, which took more than three months to complete, provided a fitting conclusion to Beachcomber’s 60th anniversary celebrations. Over and beyond the excellence of its hotels, Mauritius’ pioneer in the tourism sector has wanted to share all the country’s richness and diversity through a film on the holiday destination, of which the making-of presents a foretaste.