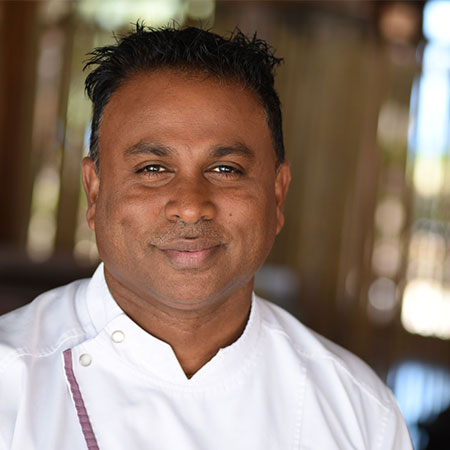 The Mauritian, Gérard Pyaneeandee has spent his entire career to date with Beachcomber Resorts & Hotels and holds the position of Executive  Chef at Canonnier Beachcomber Golf Resort & Spa

Gérard Pyaneeandee is a true local, coming from the nearby village of New Grove. He began his career in hospitality as trainee cook at Shandrani Beachcomber Resort & Spa in 1991 while completing his professional qualification in food production.

He perfected his skills on the job and gradually moved through the various ranks to the position of Sous-Chef at Le Sirius Restaurant in 2001. The following year, he was offered the opportunity to move to another hotel, Sainte Anne Resort & Spa in the Seychelles.

After a two-year overseas spell, Gérard came back to the hotel where he had made his first steps and continued on his culinary path. During his 26-year career, he also underwent industrial training within the Group, namely at Paradis Beachcomber Golf Resort & Spa and Mauricia Beachcomber Resort & Spa. Additionally, he won the gold medal at the Meat & Livestock Australia Competition in 2005 and completed a one-month internship in 2016 at the prestigious Restaurant Georges Blanc in France.