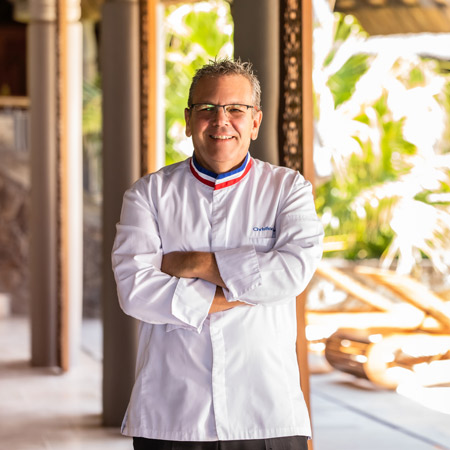 With more than 30 years of experience, the French-born Chef, Christian Née has polished his skills in various recognised culinary establishments.

The Executive Chef’s background includes more than 20 years over two distinct spells at La Pyramide, a two-Michelin-starred restaurant in Vienne. He has also honed his talent at Château de Divonne with his predecessor at Royal Palm Beachcomber Luxury, Michel de Matteis.

Recognised among the Best Craftsmen in France (Meilleurs Ouvriers de France), Christian has shone in a number of prestigious competitions, including the Pierre Taittinger International Culinary Award and the Concours Gastronomique d’Arpajon. He also took part in a series of gastronomic weeks in different countries including Mauritius together with La Pyramide Restaurant and the Paul Bocuse Institute.

Christian brings all his passion and inspiration to carry on the hotel’s long-standing tradition of culinary excellence.